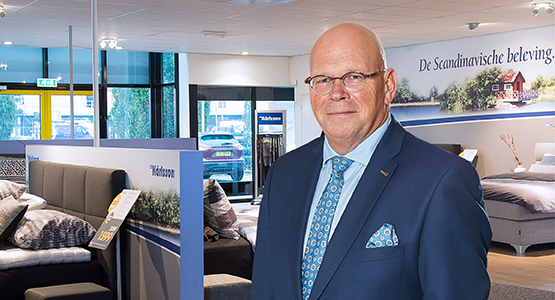 2018 was a year characterised by major changes for Beter Bed Holding. The underlying results have shown a downward trend for several years and the company responded to this in the course of 2018. The objective behind these changes was to once again make Beter Bed Holding future-proof through a strategy, cost structure and leadership that suit the company. Central to this strategy is the promise of delivering the best-quality rest at affordable prices via the channel that best suits the individual customer.

In 2018 the Group realised mixed results per region. The success of Beter Bed in the Benelux and of Beddenreus in the Netherlands continued to be strong, with both sales and profit improving. The mostly renewed management team has started the process of further refining the strategy, integrating a greater call to action in marketing communication and further intensifying the focus on continued development of the online position.

In Germany, Matratzen Concord was unable to reverse the negative trend of decreasing numbers of visitors and the related negative sales performance. All the positions on the management team for Germany, which is also responsible for Austria and Switzerland, were filled during the year under review. This management team started by making an issues analysis that led to a restructuring program for all three countries. The restructuring was completed by 31 December 2018 and led to downsizing the network in the region by 172 stores. A total of 64 FTEs were made redundant at the head office and a far-reaching rationalisation of the assortment led to a reduction of inventories. The first new products were launched in the fourth quarter of 2018.

Matratzen Concord Austria had a reasonably stable year in terms of sales performance with slightly lower margins but qualitative improvement of the total organisation. In contrast, Matratzen Concord Switzerland had a difficult year in terms of sales performance and was held back by substantial logistical challenges. Signs of a cautious recovery became visible at the end of the year.

Sängjätten in Sweden expanded its network considerably in the first six months to 27 stores. The focus in the second half of 2018 was on launching its own logistics, further professionalising the local organisation and developing the online proposition.

It became clear in the course of 2018, following an internal review, that it was not probable that El Gigante del Colchón in Spain would be able to achieve sufficiently profitable operations on the one hand and a strategic position on the other in the short to medium term. It was consequently decided to discontinue the activities and to sell the assets.

Economic developments in the countries in which Beter Bed Holding operates remain relatively favourable for 2019, although the risks of growth-decelerating effects are increasing and approaching. The Group remains optimistic for the Benelux due to the numerous positive developments in 2018 and the plans and initiatives for 2019. Matratzen Concord started 2019 with a downsized network, lower cost pressure, a rationalised and renewed range, new signing and communications and above all a new spirit. In 2019 greater attention will be given to accelerating online in the German-speaking countries and online growth in the Benelux through a corresponding service model.

The Group is convinced of the merits of its mid-term strategy that was launched at the Capital Markets Day. The implementation of the customer-focused value-for-money proposition, best sleep advice, seamless omni-channel experience, strong performance culture and cost leadership success factors is of vital importance to structurally fulfil the promise to offer best quality rest @ affordable prices. The Group is working on the further refinement of the current strategy which will be presented at the second Capital Markets Day end 2019.

2018 was also a year characterised by a number of managerial changes. In addition to the appointment as CEO effective 1 April 2018, Hugo van den Ochtend took up the position of CFO of the Group on 1 September 2018 following Bart Koops’ announcement to leave Beter Bed Holding. This ended a period of more than five years during which Bart carried out his role with passion and dedication. In addition, the complete management teams of Beter Bed and Matratzen Concord were exchanged almost entirely in 2018.

Despite the challenging phase the Group is going through, Beter Bed Holding is able to shape a change process through which the Group has been able to achieve further development in a number of areas. In addition, the Group succeeded in further strengthening its position in a number of countries, carrying out a material reorganisation and developing and communicating a first-phase strategy at an extremely well-received Capital Markets Day. Beter Bed Holding could have never accomplished this without the passionate and committed contribution of the employees and stakeholders.

The Group consequently wishes to sincerely thank all employees and stakeholders for the contribution they have made both individually and as part of a team.

Report of the management board